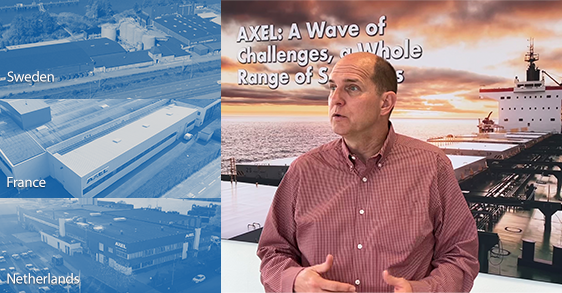 After attending our General Management Team (GMT) meeting, Greg was warmly received at our 3 European facilities in Nol, Sweden, Heijningen, Netherlands, and Niort, France. Greg’s packed agenda included meetings with management and key personnel, plant tours, and soaking up best practices from the whole AXEL team.  Go One AXEL!   On May 23rd, Greg took up the role of new President for AXEL Americas and AXEL Royal.

A little bit about Greg:
Greg graduated with a degree in chemical engineering from North Carolina State University and later received his MBA from Harvard Business School. He then spent six years with Deloitte Consulting and was a Senior Manager in their Manufacturing Industry Practice. After three shorter positions, Greg joined NCH in 2003, as COO of two oil field chemical subsidiaries for a successful period of ten years. In 2013 Greg joined NanoMech (which became VinTech Nano Materials in 2019) as VP and later served as President focused on industrial and oil field lubricants. During this time, he became a customer of Royal Mfg and then AXEL Royal and had the opportunity to work with the production and technical teams in Tulsa, Schertz, and Kansas City. Most recently, Greg was COO & VP of OTA Compression. In summary, Greg has extensive experience as a senior leader in businesses that are closely related to our industry.

Greg is currently living in the Dallas area and has already started preparing for his relocation to Tulsa. We wish Greg the best of success with his new responsibility and are happy to have him on the AXEL Team.